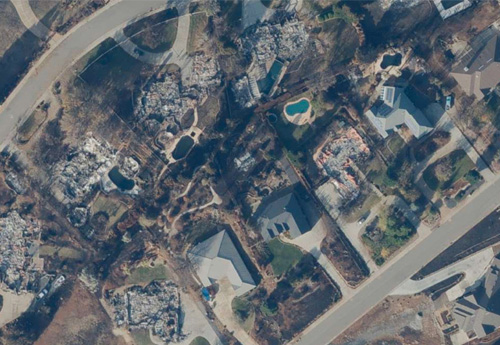 Walking the blackened earth where a wildfire has passed through, there’s much to learn. We can see the growing scope of the hazard, how a brush fire explodes into a catastrophe, the challenges firefighters face, and the choices people make that can save or threaten lives and property.

In Paradise, California, after the historic Camp Fire, the sights were familiar to veterans of past fires but startling to visitors seeing a major wildfire scene for the first time: a lone structure still standing untouched in a wasteland of charred foundations or one ruin fallen amid a block of intact homes.

I was one of a small group that toured the town in January as part of a post-event effort to unify stakeholders—including representatives of government, the fire service, the insurance industry, and research organizations—that serve Californians at risk of wildfire. We visited the site to deepen our understanding of how such a disaster unfolds.

Here are some of the sights and their implications that struck me:

Any large wildfire is likely to produce some inexplicable outcomes. Properties adhering to the latest codes and guidelines can be destroyed, while others that seem to have the entire risk deck stacked against them may come out unscathed. For every instance, there’s a reason waiting to be understood. But on the whole, preparations and precautions that are well entrenched in vulnerable areas do help.

The National Fire Protection Association’s (NFPA) Firewise USA®program provides extensive education and advice to help wildfire-exposed populations protect themselves and their properties. In the Camp Fire and others, how much worse might the outcomes have been without these guidelines? And the Ready, Set, Go! campaign of the California Department of Forestry and Fire Protection (CAL FIRE)—a program managed by the International Association of Fire Chiefs (IAFC)—also helped residents begin prompt, life-saving evacuations.

The ongoing study of wildfire events can help further confirm what works and what doesn’t, reveal areas for improvement, and point to questions that haven’t been considered before. Such continual learning is needed to stay ahead of the rising threat of wildfire as a year-round phenomenon. As Governor Gavin Newsom made clear in his executive order issued on January 8, this will require tapping a wide array of resources in the public and private sectors.

When actively managing  exposure to wildfire risk, it’s important to understand the tools that can help guide decisions. Science can hold up a mirror to the choices homeowners and communities make about individual properties, overall development strategies, and public safety as well as what gets built, how and where it’s constructed, and the resources devoted to protection from wildfire and other threats.

The choices become more complex as expensive housing markets in fast-growing local economies drive development deeper into the wildland-urban interface (WUI), where the wildfire battle is most intense. These are areas where homes and businesses abut dry, mountainous, fuel-rich environments that often have seasonal weather patterns that can heighten extreme fire behavior. There may be hard choices to make—but also opportunities for state and local governments, communities, first responders, and the private sector to join in responsible, sustainable solutions for the people who live as neighbors with nature.

Brad Bain, a Certified Fire Protection Specialist (CFPS), is vice president of Community Hazard Mitigation at Verisk. You can contact Brad at Bradley.Bain@verisk.com.