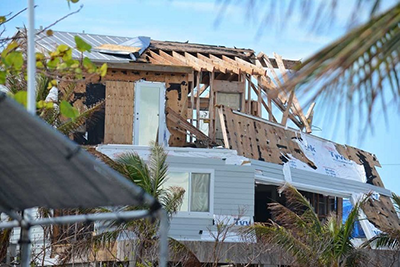 According to a Moody’s Analytics article this past September, the total cost of Hurricanes Harvey and Irma could reach $200 billion. In addition, the economy could suffer another $20 billion to $30 billion in lost output. Moody’s previously estimated the total cost of Harvey between $86 and $108 billion and Irma between $64 and $92 billion.

Natural disasters such as hurricanes, floods, earthquakes, and other devastating events take a terrible toll on people, property, and businesses. Mitigating their effect before they happen is a key element of community planning throughout the United States. One proven and time-tested method of reducing the cost of these events is establishing effective building codes—and enforcing them.

ISO Community Hazard Mitigation’s Building Code Effectiveness Grading Schedule (BCEGS®) program was created for just that purpose. Born from high-loss events in the early 1990s and modeled after ISO’s Public Protection Classification (PPCTM) program for the fire service, BCEGS was created as a cooperative effort between government and the insurance industry. A voluntary program, it measures the effectiveness of building codes throughout the country, as well as the resources and support for the enforcement of those codes.

There’s empirical evidence from such entities as the Wharton School’s Risk Management and Decision Processes Center on the benefits of effective and well-enforced building codes. In Florida, Wharton studies have shown that windstorm losses are reduced by as much as 72 percent thanks to the implementation of statewide building codes. Florida ZIP codes with favorable BCEGS ratings reduce losses by 15 percent over areas with low or missing BCEGS ratings. Also, higher BCEGS ratings reduce windstorm losses on the order of 42 to 55 percent when combined with newer construction.

Communities that want to be prepared for natural disasters must work to adopt and enforce effective building codes. A 2005 study by the National Institute of Building Sciences concluded that funds spent on hazard mitigation before an event can reduce losses by almost $4 for every $1 spent. The federal government supports this concept by making predisaster grants available to communities that effectively institutionalize natural hazard mitigation strategies in their building code adoption and enforcement.

BCEGS ratings from 1 (exemplary commitment to building code enforcement) to 10 are field-verified and have more than 43 million individual data elements in the BCEGS database. Classifications cover 87 percent of the U.S. population. For comparison’s sake in relation to their preparation for the twin disasters of Harvey and Irma, here are snapshots of Texas and Florida’s BCEGS data from ISO’s 2015 National Building Code Assessment Report: 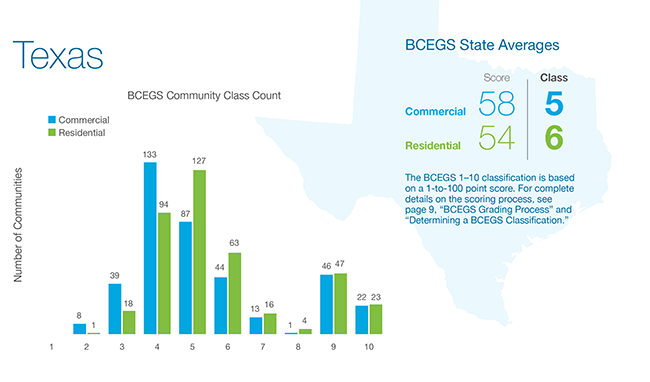 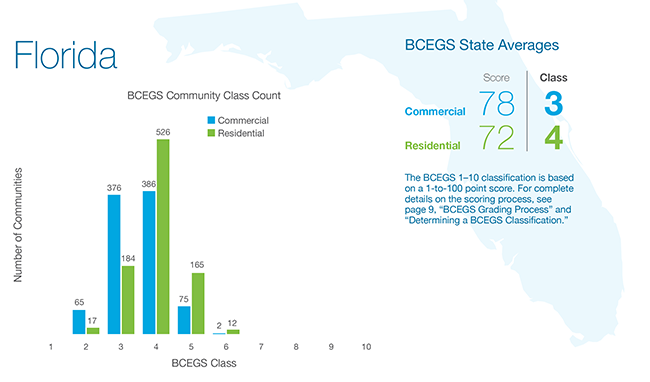 At this point, it’s well established that building codes are effective at mitigating losses due to catastrophic events such as Hurricanes Harvey and Irma. Following Irma, Florida Senator Bill Nelson said, “Building codes do work because, where there was a new structure [built] according to the new codes—the International Codes standards—the structure is still there. Where there was an old structure next door not built to the I-Codes, it’s gone.” (See article.) However, having codes on the books isn’t enough. It also takes rigorous enforcement to make them effective. BCEGS classifications are an indication of that commitment and rigor of enforcement.

For more information on ISO’s BCEGS program, see our website.