According to Tom Harbour, former director of the United States Forest Service (USFS), 2015 was a record year for the national fire season. At a presentation of fire service legislative leaders, Harbour noted the following statistics for last year: More than 9 million acres burned, requiring the service of more than 27,000 firefighters and $1.7 billion spent by the U.S. Forest Service to suppress the fires—a record amount. Over the last decade, the fire season has become 2.5 months longer, and fires covering more than 10,000 acres are increasing.

The greatest concern is that, since 1990, 60 percent of all new housing units were constructed in the wildland-urban interface (WUI). WUI areas are defined by the USFS as places where built structures abut or intermingle with undeveloped natural areas. WUI land is in great demand for new houses and other developments because people enjoy visiting and living in natural settings. The WUI is located throughout the United States.

Traditionally, the wildland fire season has been associated with the western United States, although there have been some years during which major wildland fires occurred outside that region, such as in Texas and Florida. However, climate change, building practices, and land management are increasing wildfire risks throughout the country. In fact, what many people don’t realize is that the greatest potential for fires and increased property losses is not in the western states but on the East Coast from Florida to Maine. 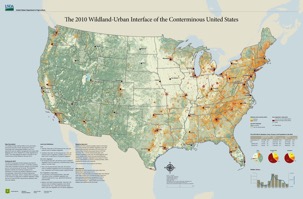 The map shows the great risk for devastating fire loss along the entire East Coast, a fact most people don’t know. Current climate conditions have prevented devastating fires on the East Coast so far, but that could be changing. The states with the greatest number of homes in the WUI are California, Texas, Florida, North Carolina, and Georgia. In 2010, the WUI was home to about 99 million people, with those five states having the most residents living in the interface. Development in the WUI continues. Add the effects of climate change, and you get an increased risk for disaster.

Climate change is not the cause of wildfires, but its effects make large fires more frequent and the season longer, as reported by Scott L. Stevens, professor of fire science at the University of California, Berkeley. Stevens said that climate change is one factor influencing WUI fire loss. Other factors are home building, which has little consideration for fire exposure, and the reduction in wildland management, such as prescribed burns or fuel removal. Stevens predicts that by 2050, average temperatures will increase by 5 degrees and the fire area by 2 to 6 times. And suppression costs may double in the next 10 to 15 years.

The costs associated with wildfire are expanding—not just the cost of suppression, which was more than $1.7 billion in 2015, but also insurance and economic loss. California alone had two fires last year involving 2,776 buildings with an estimated financial impact of $1.95 billion. And both Harbour and Stevens have indicated that the situation is going to get worse.

As the risks and losses from wildfire continue to grow, the fire service, insurance industry, communities, builders, and residents need to implement stronger mitigation programs. Proven ways to reduce the occurrence and devastation from wildfire are prevention, maintaining defensible space, building fire-resistive buildings with appropriate suppression systems, and implementing programs such as the National Fire Protection Association’s (NFPA) Firewise Communities Program. A strong push is needed to implement these methodologies.

Wildfire is everyone’s problem, whether you live in an urban environment or in the WUI. The costs associated with wildfire affect us all.