An issue brief by Jeffrey Czajkowski and Kevin Simmons

Hailstorms are a persistent and chronic source of property losses for homeowners and insurance companies in the United States.

Hail losses were the second-largest cause of insured property loss in Missouri from 2008 to 2010, as well as the most frequent source of a loss claim incurred.

Based upon various industry and exposure-based models, the more favorably rated ZIP codes in Missouri — with effective and well-enforced building codes — significantly reduced damage from hail from 12 to 28 percent on average, as compared with less favorably rated and unclassified ZIP codes.

Adhering to local building codes and communities’ ensuring the proper licensing of contractors play a critical role in the mitigation of hail losses.

We model industry- and exposure-based hail claims insurance data from 2008 to 2010 in the highly hail-impacted state of Missouri.

Adhering to local building codes and communities’ ensuring the proper licensing of contractors play a critical role in the mitigation of hail losses.

Kevin Simmons (ksimmons@austincollege.edu) holds the Clara R. and Leo F. Corrigan Chair of Economics at Austin College. Dr. Simmons received his Ph.D. in economics at Texas Tech University, where he developed an interest in the economics of natural hazards. In 2010, he served as a Fulbright Scholar in Norway and will again serve as a Fulbright Scholar in Canada in 2014. Funding for his research has come from NOAA, NIST, and the National Science Foundation. In addition, he has received funding from various insurance-related institutes, the Institute for Catastrophic Loss Reduction (Toronto, Ontario), and the Insurance Institute for Business and Home Safety (Tampa, Florida).

About the Wharton Risk Center
Established in 1984, the Wharton Risk Management and Decision Processes Center develops and promotes effective corporate and public policies for dealing with catastrophic events, including natural disasters, technological hazards, terrorism, pandemics, and other crises. More information is available athttp://www.wharton.upenn.edu/riskcenter.

The authors acknowledge research support by the Travelers Companies, Inc., and ISO.

Reprinted with the permission of the Wharton Risk Management and Decision Processes Center, University of Pennsylvania. 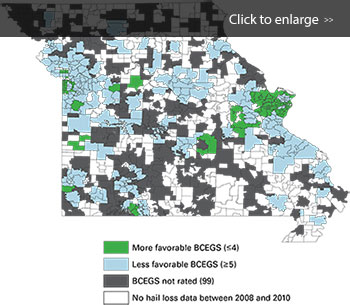 The map above shows the location of each of the 532 ZIP codes in Missouri with a hail loss in at least one of the three years from 2008 to 2010, overlaid with their average BCEGS rating. Among the 532 ZIP codes with at least one claim, 59 percent have a BCEGS rating — either more favorable (19 percent) or less favorable (40 percent). Thus, for our analysis, conditional upon the occurrence of the hazard, only 41 percent of ZIP codes in Missouri used in the loss analysis have an unclassified 99 BCEGS rating. The more heavily populated areas of the state, such as Kansas City, St. Louis, Joplin, Springfield, and so forth, have BCEGS ratings in place.

We are able to use our industry loss model results to illustrate expected damages. For example, the chart shows predicted losses from our estimations for various categories of hail size. The chart also illustrates lower average predicted damages in ZIP codes with more favorable BCEGS ratings for all hail sizes.