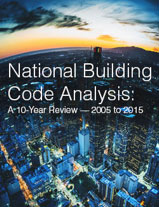 In February 2016, ISO Community Hazard Mitigation published our National Building Code Assessment Report, which provided a snapshot of the nation’s building codes. However, that moment in time doesn’t tell the whole story, so we created our National Building Code Analysis—an analysis of each state—and reported on the trends we identified. That analysis, released in October, was, quite frankly, heartening for anyone concerned with resilience, effective codes, and limiting loss.

According to our analysis, building code adoption and enforcement have improved in more than 70 percent of the states tracked. From 2005 to 2015, 31 states improved, 3 were unchanged, and 8 didn’t score as well.

We know that municipalities with well-enforced, up-to-date codes enhance community safety standards and demonstrate better loss experience, and insurance rates can reflect that. The prospect of lessening catastrophe-related damage and ultimately lowering insurance costs provides an incentive for communities to adopt the most stringent and appropriate code for their area—and back it up with rigorous enforcement.

Even though adopting and enforcing increasingly more stringent building codes isn’t easy for many communities, our analysis is solid evidence that more effective codes are being adopted and effectively enforced across the nation. We’re proud to work with so many communities toward our common goal of safer buildings, less damage, and lower insured losses from catastrophes and other weather-related events.

Maine offers us one example of how seriously towns take the issue of building codes. The state has stronger codes generally than its municipalities, but it doesn’t require towns with less than 4,000 residents to adopt them. One coastal town fell under that threshold and was enforcing codes more than ten years old. Fortunately, the community’s new building official was eager to make improvements to his department and its BCEGS grade. He realized the old codes were a problem, especially because the addition of so many summertime residents increased the town’s population significantly, also increasing the risks. The official reached out to us, and several weeks later, after we collaborated on the town’s options, he informed us the community was adopting the state codes—even though it wasn’t mandatory. Together, we worked on ways to improve the BCEGS classification.

Another example is Newport Beach, California. The city sits on the Newport-Inglewood Fault, which has been responsible for some fairly large earthquakes dating back to 1920, with several more since 2000. Fortunately, local government, business, and community leaders knew what to do: be as prepared as possible to minimize loss through prevention. In a world rife with damage from climate and seismic events, effectively enforcing building codes is one of the best preventive measures a city can take. Over the years, we’ve collaborated with Newport Beach on its BCEGS classification, and the city has maintained a classification of 1, the highest rating attainable, offering the best possible protection against a natural disaster.

For more information about ISO Community Hazard Mitigation, go to www.isomitigation.com. If you have any questions about BCEGS or our analysis, please don’t hesitate to e-mail me at Dale.Thmure@verisk.com.