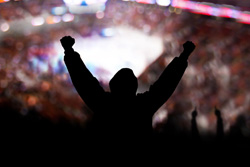 America loves a good underdog story. Maybe it’s because our country started out as one, or maybe it’s just human nature. Perhaps the iconic movie character who epitomizes the spirit of the underdog is Rocky Balboa from the Rocky movies. This undersized everyman fighter from working-class Philadelphia competed without the benefit of modern training or support and still achieved his full potential. No matter how many times he was beaten down, Rocky always rose to his feet, looked his opponent in the eye, determined he wasn’t done, and kept on fighting.

Communities throughout America are just like Rocky Balboa. Despite being assaulted by many massive tornadoes, hurricanes, superstorms, wildfires, and other major disasters over the last several decades, they continue to battle back to life. They’ve overcome disasters with names like Katrina, Sandy, Ivan, Francis, and Charley—as well as numerous unnamed floods and tornadoes—that have battered them and tested their resolve to rebuild. Some disasters have taken longer to recover from, and many have left scars. But each time, Americans rally and rebuild to see our communities come alive again with activity, commerce, recreation, and growth.

As with Rocky’s opponents, our natural disaster foes seem to get bigger and more devastating with each fight. Climate studies, including the 2014 National Climate Assessment from the U.S. Global Change Research Program (USGCRP), have shown that the frequency and severity of extreme weather events have increased in the last several decades. The assessment summarizes the effects of climate change on the United States now and predicts what the future will bring. Three hundred experts guided by a 60-member federal advisory committee produced the report, which was extensively reviewed by the public, other experts, federal agencies, and a panel from the National Academy of Sciences. See www.globalchange.gov for more details.

The assessment reported that the measured global average temperature increased between 1 and 1.5 degrees Fahrenheit since 1900. It’s expected to rise another 0.5 degrees over the next few decades as the best-case scenario. This global rise has been linked to observations about increased weather events. Global average sea level has risen 8 inches since reliable record keeping began and is expected to rise another 1 to 4 feet by the year 2100. The debate on the causes of the increases is a topic for another forum. However, for city and county planners and responders, the important message is that extreme weather is expected to continue—and potentially worsen.

Climate studies and predictions about future climate conditions have sparked discussions in recent years about building more resilient communities. Presidential Policy Directive 8, issued in 2011, introduced the National Preparedness Goal and worked to coordinate emergency preparedness efforts at the national, state, and local levels. The National Preparedness Goal is “a secure and resilient nation with the capabilities required across the whole community to prevent, protect against, mitigate, respond to, and recover from the threats and hazards that pose the greatest risk.” According to the Federal Emergency Management Agency (FEMA) website, the risks include natural disasters, disease pandemics, chemical spills, other man-made hazards, terrorist attacks, and cyber attacks.

In the past, terrorist and cyber attacks were thought about differently than natural disasters. Today, considerations of overall community resilience promote holistic thinking about preparedness, with both man-made and natural disasters included in the same discussions. When it comes to responding to the needs of our citizens, why separate events as man-made or natural? The National Emergency Management Association is the professional group where many state and local emergency managers meet to talk with each other and FEMA officials about the issues they face and best practices to address them. Topics have focused on weather events, but recent meetings have included a broader range of threats. This year’s annual forum included a breakout session on “The Emerging Breadth of Emergencies and Disasters: Is the Role of Emergency Management Changing?” Emergency managers were told they should plan for events such as power disruptions, other infrastructure attacks, terrorist attacks, cyber attacks, and even financial market attacks.

Conversations about overall community resilience are more prevalent for a number of industries, including emergency management, construction, retail, insurance, and others. For emergency management, FEMA may introduce a disaster deductible for public assistance. It would require states to fund a certain amount of disaster response first before federal aid becomes available for public assistance. There’s discussion about states, and by extension local communities, being able to decrease their individual disaster deductible through preparation and resilience efforts. This is similar to how the Community Rating System works today for the National Flood Insurance Program (NFIP). You can read an article about states reducing the deductible through preparedness investments.

The criteria haven’t been determined for qualifying for the disaster deductible, but the measures a community takes toward resilience will likely become an important part of local planning if they’re directly tied to a reduced deductible. In the building and construction industry, the U.S. Resiliency Council offers certifications for buildings based on their ability to withstand earthquakes and other natural disasters, and many organizations within the building industry have made statements about resilience. The retail industry is joining the conversation, too.

The insurance and reinsurance industries are talking about how measuring individual building and overall community resilience would factor into insurance discounts. This would be similar to the ISO Public Protection Classification (PPC®) ratings. The National Association of Counties (NACo), the Federal Alliance for Safe Homes (FLASH®), the National League of Cities, and many other associations focused on community strength are hosting meetings or having discussions about resilience. It seems the resilience trend is sweeping the country, just as the green trend did several years ago. Whether or not the phrase is a buzzword, the concept of communities being prepared to get up and running quickly after a disaster will continue to be an important topic for local governments, builders, business bureaus, retailers, and emergency response teams. Verisk participates in several conversations about resilience with regard to our Building Code Effectiveness Grading Schedule (BCEGS®), PPC, and other products that are part of the preparations that local communities have taken toward resilience before it was such a popular topic.

You might already think none of this is new, and you’d be right. “Build it back better,” “future proofing,” “weather-resistant,” and other terms used in the past address the same concept: learning from the weaknesses that past disasters have exposed to make communities stronger against future events. The difference now is that the national focus around resilience may lead to increased financial incentives—or negative reinforcements, depending on how you look at it—tied to products and programs that affect our communities. These include emergency response funding, insurance rates, building permits, inspections, mortgage and real estate transactions, and recreational planning.

Along with the discussions and general agreement that communities need to focus more on resilience, there’s a fair amount of difference in what resilience means. Some organizations want a single resilience index or score for a community that describes an all-encompassing rating against any potential disaster, natural or man-made. Other organizations look to measure various systems separately, such as power supply, transportation, emergency communications, emergency supplies distribution, hospital capacity, and a myriad of others. They feel a community’s weather history, geography, or culture may promote different types of investments in resilience. Still others want resilience measured against each type of possible event so that a community could have different ratings—for example, a strong rating against flood but not as strong against cyber attack.

You’ll continue to hear about community resilience in the future. If you’re already exchanging concerns and ideas with any national or local groups, you’re ahead of the game. Conversations are still emerging, and the country is still trying to define what resilience means and how it’s measured. We also need to learn how the new administration in Washington will handle this issue. The previous administration dedicated significant resources toward climate resilience. Will that continue?

Like Rocky, we need to prepare for the challenges the future sends our way. We don’t know what is ahead of us, but everyone should be part of the conversation about how our communities can be better prepared for the punches that will come.