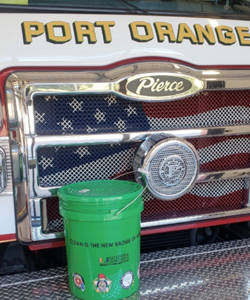 Contrary to public perception, the major cause of death for firefighters is not fire—it’s cancer. From January 1, 2002, to March 31, 2017, cancer caused 61 percent of career firefighter line-of-duty deaths, according to the International Association of Fire Fighters (IAFF), with 70 percent in 2016 alone. Firefighters have a 9 percent higher risk of being diagnosed with cancer—and 14 percent higher risk of dying from the disease—than the general U.S. population, according to the CDC/National Institute for Occupational Health and Safety (NIOSH). (For more details read “The Hidden Killers of Firefighters,” also in this issue.)

To help combat this devastating statistic, Florida—with a $1 million grant from the University of Miami Sylvester Comprehensive Cancer Center and in partnership with the Florida Firefighters Safety and Health Collaborative and Fire Fighter Cancer Support Network—has provided more than 4,500 decontamination (decon) kits for each fire apparatus in the state. The kits are essential in the battle to reduce firefighters’ exposure from the cancer-causing byproducts of combustion.

You Make the Call: