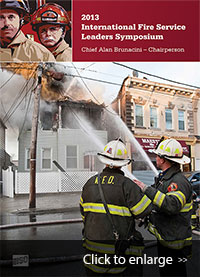 ISO recently hosted the two-day International Fire Service Leaders Symposium, a semiannual, invitation-only event where fire service officials meet in an informal setting to discuss hot-button topics affecting fire and emergency services. Fifty of the most influential fire and emergency service leaders from the United States and Canada gathered at our Jersey City headquarters. This prestigious group explores problems plaguing fire departments nationally, including the affects of a slumping economy on resource management, recurring natural disasters, and changes in building construction that affect saving lives and protecting property. Thought leadership and “outside-the-box” solutions are at the forefront of every discussion.

Chief Alan Brunacini, retired chief of the Phoenix Fire Department and distinguished leader within the fire service for more than three decades, led the group. Chief Brunacini served as the chairman of the National Fire Protection Association (NFPA) 1710 Technical Committee for Fire Service Organization and Deployment Projects. He’s also authored or coauthored nine books, including The Anatomy and Physiology of Leadership and Fire Command, used by fire departments across the nation.

A highlight of the hosting experience was a group trip before the symposium convened. FDNY Chief Edward Kilduff led a tour of the World Trade Center site to visit the 9/11 Tribute Center and Memorial.

Bill Raichle, president, Verisk Insurance Solutions – Commercial Property, opened the program. He gave the audience a brief history of ISO and praised the fire service representatives for their commitment and continued interaction with us. Mark Anquillare, group executive of Risk Assessment and executive vice president and chief financial officer, welcomed the attendees and expressed his appreciation for their service.

Kevin Kuntz, assistant vice president and chief engineer, Verisk Insurance Solutions – Commercial Property, and Butch Cobb, national director, ISO Community Hazard Mitigation, brought the group up to date on the revised Fire Suppression Rating Schedule (FSRS) and the ISO Building Code Effectiveness Grading Schedule (BCEGS®) program. A discussion ensued on today’s building construction versus legacy construction and the changing strategy and tactics needed to fight fires safely at buildings constructed of lightweight components. The importance of residential sprinklers to reduce property damage and save lives was a common theme. Bob Andrews, vice president, ISO Community Hazard Mitigation, talked about the implementation of the FSRS that took effect in most states July 1, 2013. He also spoke about the training opportunities available to fire service organizations that will thoroughly explain the changes to the schedule and help communities prepare for the next grading.

Another area discussed was the correlation between an ISO Public Protection Classification (PPC®) grading and the strategic and tactical decisions made by fire officers on the fireground. The group agreed to discuss this critical topic further at the next meeting.

“We’re pleased to have the opportunity to host the International Fire Service Leaders Symposium. Collaborating with such an influential and respected group helps us stay on the leading edge of key and evolving issues and reinforces our commitment to community fire protection,” said Kuntz.

Raichle concluded the program by leaving an open invitation to the group to return to the Verisk and ISO home office at any time.

“Our collaborative effort has left an indelible mark on this prestigious group of fire and emergency service leaders and will greatly enhance our relationships going forward,” Cobb said.